For so long while business traveling, do you know what was ultimately my biggest problem?

I brought ME with me on the trip! I know, right?

The same bad habits I had at home went with me on the road. It’s like I packed them on my carry on along with that guy, Murphy, from Murphy’s Law.

And some of the those same habits were actually magnified on the road: I ate and drank more, and slept less. A sure-fire recipe for over-weight and exhaustion. Can I get an amen?

It was like I needed to become someone different in a good way on the road. But I wasn’t being different, I was way too much of the old me. The unaccountable, company credit card, and often too much free time me. I all too often was magnifying the bad parts, even the addictive parts of me on the road. Everything from working too much to drinking too much.

Then I heard an interesting backstory of someone I watched growing up.

I couldn’t keep my eyes off of him when he played sports. He was a highlight reel before ESPN SportCenter highlights really caught on like it is today.

It was Bo Jackson’s Story.

For those of you who don’t know that name, he’s the only athlete in the major four North American professional sports to be an all-star in two of them (baseball and football). Even Deon Sanders couldn’t pull this off. Sorry, Show Time.

Bo was a highlight waiting to happen in the 1980s who absolutely transcended sports. When you saw what he did you said “No Way. That’s not possible. Play it again!”

The greats in college have to choose between two sports – not Bo Jackson. He took on two major sports and excelled in both. Simply amazing.

He even had a popular string of Nike commercials called “Bo Knows.”

But most don’t know his backstory. As a kid, Bo had big time challenges containing his emotions and would get into a ton of trouble because of his outbursts of anger.

Often, he’d get caught up in the competition, and he’d retaliate against even the smallest perceived slights. The result? He would get hit with unnecessary penalties.

One day as Bo was watching a movie, he became fascinated by the unemotional, cold, and relentless nature of Jason. Does that name ring a bell? Jason was the hockey mask-wearing killer in the Friday the 13th movies.

At that moment during this particular movie, something in Bo absolutely changed. He had a breakthrough, soon-to-be light bulb moment.

He resolved to stop being Bo Jackson on the football field, leaving his uncontrollable rage on the sidelines.

And this is the key part of the story. To Bo, Jason only lived on the field. And when he walked out of the locker room and reached the football field, Jason would enter his body and take over.

Then suddenly, this hotheaded, penalty-prone, easy-to-provoke Bo Jackson transformed into a relentless, cold, and disciplined destroyer on the football field.

As Todd Herman puts it, Bo was channeling a “different” identity that helped him focus every ounce of talent and skill, and enabled him to show up on the field, without any emotional issues interfering with his performance.

Here’s the point: It was his “phone booth moment” just like Clark Kent transforming into Superman, Bo Jackson did the same thing when he transformed into his alter ego, Jason.

Nothing changed. I went on my next trip “thinking and acting” exactly the same. And as a result, I got the same results – imagine that. The only thing I gained was weight!

And I was tired of it both physically and mentally not to mention my wife and kids had had their fill of it as well.

I was also sick of looking into hundreds of hotel bathroom mirrors seeing the same former athlete looking like, well, I’ll let you finish my sentence.

My first problem is I was looking at the road and it’s limitations or how it enabled me, not how I could potentially leverage the road to become who I ultimately wanted to be in every area of my life.

Somehow I needed to figure out my Bo Jackson transformation when I hit the road.

I wanted to become Elite Road Warrior Bryan but something had to change in more than just my willpower and attempted behavioral change.

I needed what Todd Herman wrote on, an alter ego.

Now, I want you to stick with me because this alter ego jargon may seem a little weird but you’d be shocked at the thousands of athletes, performers, and business people who leverage the power of an alter ego.

I’ve been following Todd Herman for years from his blog post to his course, The 90-Day Year.

Then he came out with the book that I had heard him reference this concept for years, The Alter Ego Effect.

This is how he defines an Alter Ego Effect – assuming a different identity that allows you to embody a set of traits that you admire or wish to have. This new set of traits is what you then use to push yourself forward to success.

The problem is we live in the ordinary world where your enemy (inner conflict / resistance) prevents your Heroic Self from stepping up.

The enemy is there to cause you to stumble and not become your heroic self. It causes you to hesitate, overthink, and doubt yourself. Sound familiar?

And this is what happened to me.

I put little to no thought into any other world except the ordinary world (aka: business as usual or in this case business travel as usual)

But Todd Herman challenges you to create an alter ego to fight this Enemy of mediocrity who fights change to ultimately embrace life in an Extraordinary world where you succeed at the highest level.

Your Alter Ego is the key to unlocking your Heroic Self.

Your Heroic Self embodies the three key focus areas of an Elite Road Warrior:
1. Your Work
2. Your Health
3. Your Home Life

An Alter Ego allows you to embody your Heroic Self whenever you need to perform at a higher level and I wanted to perform at the highest level with not only my work but also my health and home life and knew I had this gear in me that needed to be unlocked to come out consistently.

Todd Herman talks about your…

Field of Play – this is your place of performance. For an athlete, it’s the field or the court. For a musician, it’s the stage, For a business traveler, this is “the road.”

2nd – your Moment of Impact – also called “your moment of truth” – in sports, it’s the big shot; in sales, it’s your close; in a presentation, it’s your conclusion.

And here’s the point: Your Field of Play and your Moment of Impact is when you need your Heroic Self or your Alter Ego to show up.

You might start a habit because of motivation, but the only reason you’ll stick with one is that it becomes part of your identity. Who you are or who you’re wanting to become.

When your behavior and your identity are fully aligned, you are no longer pursuing behavior change. You’re simply acting like the type of person you already believe yourself to be.

Every action you take is a vote for the type of person you wish to become. No single instance will transform your beliefs but as the votes build up, so does the evidence of your new identity.

Identity Change is the North Star of habit change.

Are you becoming the type of person you want to become? The first step is not what or how, but who.

I wanted to change more than just a “few things here and there” – I wanted to become, in this case, an Elite Road Warrior.

And this is where the Alter Ego Effect becomes not only necessary but incredibly valuable.

The theme quote for the Elite Road Warrior book: If you want to do something, you’ll find a way, if you don’t you’ll find an excuse. – Jim Rohn

You have to want to create an Alter Ego and embody it for all it’s worth for it to work. Otherwise, you’ll find an excuse NOT to make it work. 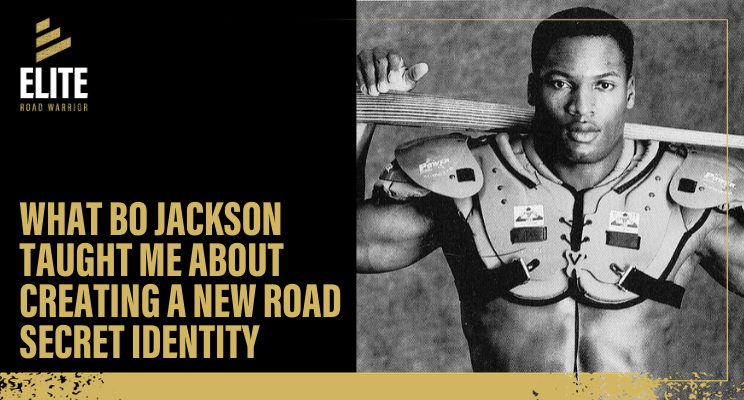 So, what exactly did Bo Jackson Teach Me About Creating a New Road Identity?

There are Three Transformational Ways to Change Your Road Identity

I’ll give you the three then I’ll be vulnerable and share with you my Alter Ego but you have to keep it between us girls – deal?

1. Decide the type of person you want to be

2. Define their “superpowers” or actions that sets them apart

3. Find a Totem or Artifact – why? It activates your Alter Ego or reminds you the Alter Ego needs to show back up

Key Side Notes:
1. the totem or artifact must symbolize something to you – it must have meaning and really work for you.
2. don’t wear, carry, or use it all the time (it’s meant to be intentional) and don’t give it away (Churchill only wore his hat in public / athletes wear “that shirt” only during the game)
3. Choose something you’ll enjoy wearing or carry with you

1. I want to be an Elite Road Warrior who has the Alter Ego of Jason Bourne

I absolutely loved the Jason Bourne series and this character is who I chose.

2. Define their super powers – if you remember the movie, Jason Bourne was transformed from David Webb and was always and I mean always…

3. Find an artifact or totem

I had to try a few things until I found out what worked and really worked for me.

I chose an aluminum water bottle – why?

My Elite Road Warrior branded black water bottle only comes with me on the road.

I can bring it with me wherever I am on the road – in a meeting, for example, and it’s not awkward or odd.

And when I drink the water, it reminds me I’m ERW Jason Bourne on the road who is highly trained and skilled as a road warrior. I’m always thinking one step ahead, aware, adaptive, and calculated. I don’t do things like the average road warrior because I’m no longer average.

How does the Alter Ego come to life for me on the road?

Through the Six Energy Habits

In my moment of temptation of doing something, I ask myself: Would ERW Jason Bourne do this or how would he respond? it actually works if you do this process correctly.

So, are you willing to create an Alter Ego for you to become an ERW?

1. Who is that person you will become?
2. What are their characteristics?
3. What will you carry with you to activate and remind you?

I challenge you to really consider this exercise.

If you pick an Alter Ego, reach out to me via email: Bryan@EliteRoadWarrior.com to let me know. I’d be honored to hear from you.