So, it was 2:15 am and was stuck outside my own house pounding on the door because my wife had locked the screen door and I was home early from a brutal three days of travel that felt like three weeks.

Ever had that trip? 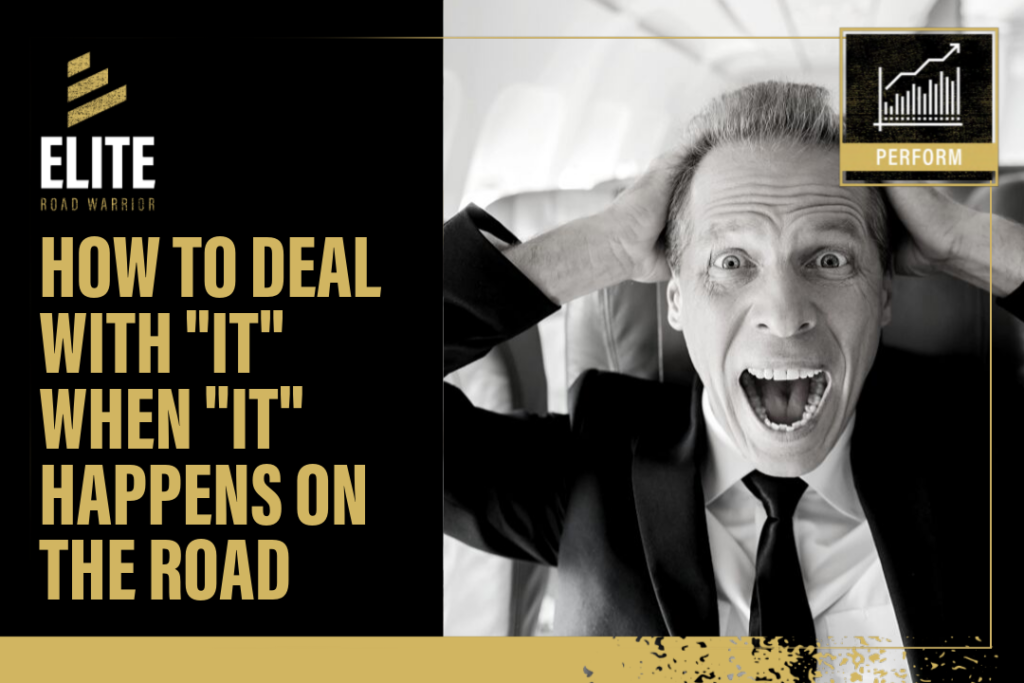 Let me start from the beginning…

I had a big meeting in Cedar Rapids, Iowa. It was one of those locations that were right between driving and flying. I chose to drive.

Not a few minutes into my drive I dealt with on-and-off rain that was just paralyzing to those on the road. Not the mist that annoys you of “should you have the windshield wipers scraping across your windshield” or pushing it just a little with the windshield.

This was black skies driving into the abyss.

And if the weather wasn’t enough, there were non-stop road repairs.

In Chicago, we have a running joke that we have two seasons: winter and construction.

We were definitely in construction season and now adding horrible weather.

And then there was the semis driving 66 mph to pass the other semi going 65mph and traffic back up for a mile.

My biggest life pet peeve is someone driving slow in the fast lane or the passing lane.

So, between the weather, construction, and traffic, my three-hour trip took well over five hours.

The meetings were good and I was to fly out of Cedar Rapids Regional Airport to Denver via Dallas.

I was required to fly an airline I don’t normally take seemingly out of convenience and was a good idea until my flight was delayed two hours. You guessed it: the weather.

From Bad to Worse…

Shockingly, I landed in enough time to make my flight although all my connection margin was shot. I was on the ground in Dallas at my gate waiting to get off my plane to make my connection waiting and waiting for almost 30 minutes as I was watching my plane board and take off literally at the gate RIGHT NEXT TO ME!

Who misses their flight and gets to watch their own flight board and take off?!?

The good news is there was another plane I could take from Dallas with the only catch: two and a half hours from now.

Mind you, I have no status with this new airline and the customer service line was longer than bathrooms at a baseball game in the 7th inning.

I finally board and that flight took off an hour late.

Of course. Why not, right?

My drive to the hotel was 45 minutes which felt like an hour and 45 minutes. Interstates down to one lane due to paving.

I made it to my hotel that was sold out and didn’t care as long as I had a room until I was put in a handicap room right next to the elevator so by 6 am I was awoken by the elevator ding every five minutes and within a few minutes, I was awake and just chose to get up.

The next day I was moved locations only to enter a room that smelled worse than the designated smoking room in an airport that you can cut the air with a knife.

I changed rooms, recovered, and looked forward to getting back on track.

I made it to the Denver airport in enough time to leverage my TSA Pre-Check and get to my gate with time to get water, walk a bit, then board.

So, I walk to the South TSA-Security line to find out my TSA-Precheck was not on my boarding pass.

Now I’m in line with everyone else strapped for time and just wanting my carry-on so I can run to get to my gate.

As someone who’s not used to a mild strip at security, I was fighting the annoyance and inconvenience but missing my flight was the only thing on my mind.

My bag gets flagged and I have to wait for someone, anyone to look through the same bag that always goes through security with zero issues.

And I waited. And waited.

I finally make it to my gate in just enough time to board. Whew, all good, right?

We board, get in my seat and watch dark skies take over what was suppose to be a picturesque sunset over the Rocky Mountains as I fly home to surprise my wife.

Then the lightning happens. Over and over. And the heavens open up. I was wondering if my plane was going to turn into an

We’re told all the time that IT Happens. Easy to say but what do you do on business travel when IT happens to you? And you know what I mean by IT happens…

What did I do when I was challenged with this in the very moment when “IT” is happening to me not just once but this whole week on the road?

Here are Four Responses to Dealing with IT When IT happens on the Road:

1st Response – Roll With IT

Before I acted like I was the only one affected. I would get worked up, find others to join in on my complaining and build my team against the wrongs done against us.

Do you know what changed?

Except I was miserable. And I had others join me and all riled up now.

The reality is nothing really improved. In fact, until I started to roll with it, I was even more affected.

Roll With It means “what happens happens” especially on business travel.

Here’s the reality we so quickly forget:

There’s just not too many things that should really surprise us on business travel especially if you’ve been doing this for any length of time.

When IT happens to you on the road, ROLL with it – what happens happens.

I found that too often once I would ROLL with IT, the rolling would stop and I would get all worked up again.

Either the roll would lose momentum and just stop or it would be an abrupt stop hitting a pothole!

For example, I finally would “roll with the delayed flight” only to get re-worked up when the flight would be delayed again.

Let IT Go means Aka: let IT keep rolling

Don’t pick IT up again

It’s not a one-time decision. You must keep letting it go.

An example would be forgiveness. Just because you forgive someone doesn’t mean you never have those feelings again. When, not if it comes back up again, you need to remind yourself to forgive again.

In this case, let IT go again.

Otherwise, it will own you all over again.

3rd Response – Learn From IT

Excuse me, did you say to learn from IT? I didn’t ’t want IT in the first place?

We want the easy, the smooth – but that’s not life especially Road Life.

Things will happen even to the most prepared elite road warrior.

The key is finding what we can learn from the situation.

My father used to say to me:

“Son, you can learn from absolutely anything. Even how NOT to do something.”

With my trip, I was reminded how many things are just out of my control and just how quickly even after all these years of traveling, I can still get sucked back into the frustration, cynicism, and let it own and control me.

I can learn from what has just happened and the best way for me is to journal about it.

One of my daily seven questions is Lessons Learned and this is my time to reflect or Process the Thoughts as I call it under Energy Habit Five – Develop.

Learn from IT is looking BACK to get BETTER.

Learn From It Asks:
How did I respond to what happened?
Could I have avoided it?
Did I pick IT back up again?
What can or should I do differently?

Did you get frustrated with someone that didn’t deserve your entitled wrath?
Did you waste time when you were given extra time?

4th Resp0nse – Make the Best of IT

It really gets down to this 4th response. After you roll with it, let it go, I mean really let it go, then learn from it, you’re forced with a choice.

Will I make the best of IT and what IT just handed me?

Do I reflect on the smell of IT and all the negative or do I learn from IT and just make the best of IT?

Make the Best of IT is Looking FORWARD.

I was given a piece of advice by a mentor who told me when IT happens to me, ask this one question:

Did you catch the power in that very simple six-word question?

As a result of IT, the delayed flight, the canceled meeting, the short night, the (you fill in the blank), what does this now make possible that otherwise might never have happened?

It takes maturity and wisdom to get to the point where you begin to learn and make the best of IT especially on the road and can ask such a powerful question:

An Elite Road Warrior takes the IT that happens on the road, washes it off, doesn’t smell like IT, and is actually better for it while others are owned by it.

The road has IT’s challenges, especially when “IT” happens to you on the road. And many times IT’s not an isolated event. IT comes in waves and can hit hard.

So, how should you deal with IT when IT Happened on the road. When not IF.

Roll With IT – In the moment – what happens happens

Let IT Go – Still in the moment – Let IT keep rolling

Learn from IT –  Looking BACK to get BETTER

Make the Best of IT – Looking forward and asking: what does this now make possible?

If you can walk away this article and apply even one of the four responses, you’ll bet better for it. And if you can begin to ask the question: What does this now make possible?

You will regain control of your Road Life and begin to defeat IT when IT happens on the Road.

So, wherever you are on the road, do something, anything, just not nothing to master the business travel life.

Stop getting by and get better.