I don’t like missing out on things. If I hear of something, I want to be a part of it. I like to be involved and have experiences, especially on the road.

But I’ve found this type of thinking can and has led me into trouble when I really want to eat healthy while traveling on business.

I’ve found I simply cannot always have both. Insert “ARGH” here of course (and that was a mild four-letter word for those keeping track at home or should I say, on the road?)

So what is this tension I create on the road called?

It’s been defined as the Fear of Missing Out.

It’s not to the extreme of a fear of snakes, heights, or even death but becomes very real to me when I feel like I’m going to miss out on something on the road.

Let me give you an all too often example.

I take a partner or customer out to dinner and the “price is no option” becomes front and center.

So, that means appetizers, the best steak, the dark chocolate dessert, and wine. And oh do I like and know wine.

Let the games begin or to some, the freak show of gluttony.

But herein lies the problem.

Do I HAVE to eat or drink everything in front of me? In the actual moment, it sure feels that way and hence, FOMO!

THIS IS BECAUSE I’VE BELIEVED THE FOLLOWING FOUR ASSUMPTIONS:

Assumption One – IT WON’T BE AROUND LATER

I fall for this all the time. If I don’t “jump right in”, the appetizer everyone wants will be gone. Or I need to get one of the first bites of dessert.

And worse for me, what if I don’t stay close to the wine?! You know, there’s always the person who gets the good wine poured into THEIR glass to be polite and here’s the kicker, they don’t even like wine! travesty I say!

Oh, the problems I need to solve in advance.

I simply assume that it won’t be around later if I wait or it’s a one time offer.

Assumption Two – I CANNOT HANDLE THE PRESSURE OF THE TEMPTATION

This may be self-imposed. I can believe the press ahead of time before I even show up so why even try.

After all, I’m going to give in anyway, right? No self-defeating attitude or justification there, eh?

Or it’s the company of others who are the friends you should’ve avoided in high school who always said, “come on, one time won’t hurt you.”

But if I plan on going in to cave, that’s exactly what I’m going to do.

The truth is they really don’t care THAT much and if I’m prepared for a couple of seconds of “pressure” (if you can even call it that), you’re almost always home free.

But it makes for a great excuse ahead of time and increases FOMO.

Before the meal, I feel like I could take it or leave it. But in the moment, oh how the mind can convince me that I absolutely need it. And just one bite or sip.

Then just “one more”. Then another. Then I’m ordering another appetizer / another dessert / another glass-is, okay, bottle of wine.

The problem is “just one more” becomes the gift that keeps on giving for me.

I don’t NEED it. I WANT it. Big difference. And this “seemingly overwhelming want” can fade so quickly.

Once I come to terms with this difference and get to the point of take it or leave it, you would be surprised what you actually need.

I’d like it but don’t have to eat or drink it.

This is my Achilles Heel in my former four-letter word of FOMO. I feel like I’m going to regret not having that killer appetizer or once in a lifetime glass or bottle of wine.

In the moment, I make a bigger deal of it that it really is and as a result, I regret it before dinner is even complete.

I MUST partake because there is no other option, right?

I sure can’t rely on everyone else at the table to make the decision for me!

This is because I’ve not considered that regret is self-imposed and has been created by me and only me.

I may miss “wondering” what it was like, but very few things with food or drink do I ACTUALLY regret. It’s all about perspective.

So, how do you change your four-letter word on the road of FOMO?

The average person on the road looks at the menu and says these four words: “what should I eat?”

How does THAT usually end?

It then leads to a downward spiral choice of another possible four words:

These seemingly innocent and simple four words put you in reaction mode.

Your willpower is the absolute lowest in these moments and as a result, so are your food choices.

We’re simply in the FOMO mode dropping THAT four-letter word and it leads to, well, weight gain, low energy, and even lower self-confidence/

But what if you chose four letters that were proactive and offered few to no regrets?

I want to challenge you to adopt another four letters that you train yourself to ask every single time you have the opportunity to eat something, anything.

We need to change your four-letter word from FOMO (fear of missing out) to MTHC.

These are Four Words That have the Power to Change Your Nutrition Regrets on the Road.

What if you said those four specific words every time you were about to eat? How much different would the results be AFTER you eat whatever you chose to eat?

Here are Four Ways to Maximize the Use of the Four Words:

We can avoid what is easiest, quickest, etc. by simply planning our meals ahead of time.

If you’re going out to eat, again, plan ahead. This can be done in two ways:

For example, I was out on business last week and taking a group out for dinner. I volunteered to look at the restaurant choices while I went out for a run and at dinner, I knew in advance exactly what I would order at the two best restaurant choices.

By planning ahead, I was able to make the healthiest choice. This can be done, nutrition fans.

2. LET SOMEONE KNOW AHEAD OF  TIME

You cannot assume others have the same definition of healthy as you.

This is critical for me on the road. Many of my meetings are over one of the three major meals.

The reality is you have more say and influence than you realize but must speak out. This is on you ultimately.

Lastly, if you’re at a restaurant and have chosen to truly adopt these four letters MTHC (make the healthiest choice)  it’s okay to ask for the server to work with you.

I do NOT suggest just ripping the menu apart and leaving the server as your enemy.

I DO recommend saying something similar to this:

“Hey Lauren, would you be willing to work with me on the menu and what I order? I’m on a pretty restricted diet trying to get my girlish figure back, and it would mean a lot to me if you would help me in this area.”

I’ve yet to have one server balk for a second on a question like this because I’m asking for their help.

Often they go over and above and even go as far as asking the kitchen if they can alter off the menu for you. What a difference!

3. BE READY FOR THE LESSER OF THE EVILS

Sometimes there are no true healthy choices. A lettuce-based salad with two vegetables (always one paper-thin cucumber and two, count em, two grape tomatoes) with a piece of dried grilled chicken is your healthiest choice.

And this could easily allow you to justify going for broke and ordering whatever you want. Careful nutrition fans.

I struggle when there are limited options and I’m on the road because I do NOT like feeling hungry.

And when I do, I’m far more likely to make a bad choice the next time because my only criteria becomes portion size! Holy Over-eating, Batman.

But if I know going in, it’s going to be slim pick ins on my choices, I refer back to #1 go in with a plan.
If I’ve done my intel and I’m prepared, it will allow me to either supplement on the front end or back end. This is what I mean.

I can choose to have a healthy snack before I go in to take the edge off or I can eat something healthy after dinner. You have these choices and they will avoid an all-too-often nutrition regret.

4. BE WILLING TO SACRIFICE NOW FOR A BETTER LATER

This is the line I need to memorize and have front and center. I need to ultimately be willing to sacrifice now, whatever I feel like I am going to miss or regret, for a better later.

And this for me is staying in great shape which is the ultimate challenge on the road. So, as a result, I need to be willing to sacrifice the short term for the long term.

And when I do, it’s worth it because I’ve demonstrated self-control and thinking of my preferred future more than my immediate gratification.

It’s always worth it in the end. I just need to get to the end. I can and you can too!

Warning: this is a process. Change your four-letter word from FOMO to MTHC takes time.

It also takes determination and dedication to have these four new letters of MTHC become natural before you eat each meal or even snack.

I’ve found that not continuing the pattern and making the 2nd mistake (excellent post by James Clear) is absolutely critical to getting back on the nutritional wagon.

Engrave “Make the Healthiest Choice” in your mind.

When I first started implementing this strategy, I wrote MTHC down on a 3×5 card. I put it on a Post-It Note on my hotel inside the door and even on a fridge if I had one. 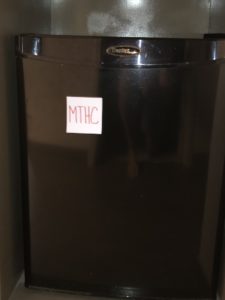 Make small Post-It Notes with the acronym MTHC as reminders everywhere. How about the hotel bathroom mirror as you’re staring at that out of shape person who seems to follow you to every hotel – Get serious, Road Warrior.

Remember, only YOU control your nutrition, so take responsibility now and escape your average in this area.